Unless you’ve been, well, out past the orbit of The Planet Formerly Known As Pluto (actually, out past the orbit of the Pluto-Charon double solar system object), you’re probably aware that Pluto is no longer a planet. Those fun-loving cosmic tricksters at the International Astronomical Union pulled it’s membership to the Planetary Club a few weeks back. What prompted this, you might ask. You might say “Xena”. In 2003, a team of German astronomers discovered an object 3.5 billion miles from the sun, with an orbit of about 560 years. It was assigned the cute little name of 2003UB13. They have a rule for these things. But the rule also allows it to have a happier name, so this was called Xena. Potential Trouble For Pluto #1 arose when the diameter of Xena was calculated to be 1864 miles. Pluto’s diameter is around 1150 miles. Pluto was a planet, Xena not so much. But Xena was bigger. Potential Trouble For Pluto #2 came when Xena was discovered to have a moon, which was named Gabrielle. Things with moons, under the paradigm then in force, were called planets. 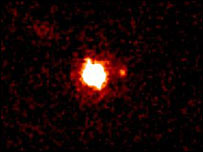 In the months between the discovery of 2003UB13, aka Xena, and this past August, things got increasingly sticky for Pluto. Nobody wanted to call Xena a planet – well, some people did, those who have been hoping for a tenth planet for decades – but most astronomers didn’t want to give it the keys to the Planetary Club liquor cabinet, because it’s becoming apparent that there could be hundreds of objects like Xena (and Pluto) floating around out past Neptune. You think it was hard to come up with a mnenomic for nine planets, try coming up with one for 372 planets! And in the case of Xena, apparently Gabrielle actually orbits around the planet, whereas with The Planet Formerly Known As Pluto and its little moon Charon, the orbital center is at a point in space between them. Sticky!

So, this past August, the IAU decided to just boot Pluto from the club rather than enlarge the member’s lounge to accomodate any number of rabble. It’s a bitter blow, no doubt, to the little Cosmic Overachiever who had been lording it over his fellow rocklets in the Kuiper Belt. It’s value dropped immediately. How much? $38.95, but more on that later. Today, as if to rub it in Pluto’s face just a bit more, 2003UB13 got a spiffy new name – Eris, named for the Greek goddess of discord. Very appropriate, really. And Gabrielle? Gabrielle was renamed Dysnomia, the spirit of lawlessness. They may regret that if the Kuiper Belt Liberation Front begins hurling rogue comets and meteors at us.

So back to the $38.95. How exactly did I determine that Pluto was worth less than a ticket to see Trans-Siberian Orchestra? Well, Sky & Telescope magazine sells books. One of their books was called “The New Solar System”. Published in 1998, it had the latest info on our sun and its planets. All nine of them. It included all the neat stuff found by the Mars probes up until that point, the latest Jupiter and Saturn missions. On all nine planets. It sold for $39.95. Today, you can buy it from them for $1. And that $38.95 price drop is purely because Pluto got exposed as just another small solar system object. They’ll call it a dwarf planet, sure, but that’s just until they build the new fence just outside the orbit of Neptune. Which itself is just a tiny chunk of rock surrounded by an enormous amount of swirling gas. Not so different from Congress. And the mnenomic thing? Kottke.org held a contest for a new one. Here’s the winning entry:

Most vexing experience, mother just served us nothing!

One thought on “How Much Is Pluto Worth?”