There’s a pond that I often go by on my morning walks. Every year there’s at least one pair of mallard ducks that set up housekeeping and raise a family. Last year there were two families. But several years ago the mallards were joined by a small diving duck with a black head and black and white body, which I (mis)identified as a bufflehead. Loren pointed out my mis-identification, noting that it was likely a scaup or a ring-necked duck.. I liked that duck – it almost looked like a toy next to the mallards. It spent the winter diving in that shallow pond for whatever diving ducks dive for, but there was no sign of it the next winter. I thought maybe I saw it once or twice on a larger pond a couple of miles away, but I was never sure. But when I walked by this morning, there amongst the mallards was a little black and white duck. I snapped a photo with my iPhone: 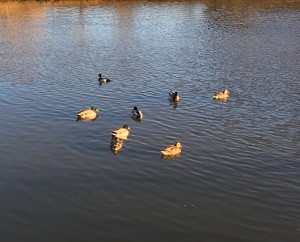 WordPress scaled the image down and it’s fuzzy, but click on it and you’ll see a better image. It’s at the top, above the mallards. Watching it for a few minutes, I realized that while it tends to hang around with the mallards, the mallards don’t particularly like it, and they’ll try to chase it away when it gets too close – nothing too intense, just a swift swim-by. Then order will reassert itself and the ring-necked duck/scaup will hang around like a pesky kid brother until it gets accosted again. I don’t know why I especially like that little duck, but I do. I hope it hangs around all winter.

2 thoughts on “Return of the Bufflehead Ring-Necked Duck. Or Maybe It’s A Scaup.”