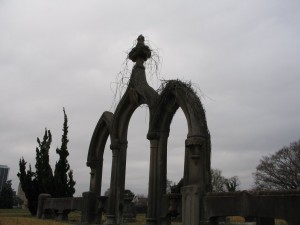 There’s an old cemetery that I’ve walked through on occasion – a couple of times when I was helping to clean up and plant some antique roses among the headstones, a couple of times when I was just walking around. The cemetery dates back to the 1820s, and holds the remains of several Mississippi governors and other notables, including those of Eudora Welty. There’s also a section of unknown Confederate soldiers. The cemetery lies in sight of Mississippi’s State Capitol building and other state office buildings, but it’s surprisingly unknown to many people. One gray January afternoon a few years ago I was wandering through some of the older parts of the cemetery and happened to notice something at the base of a large tree. When I looked closer, I saw that it was an old headstone. 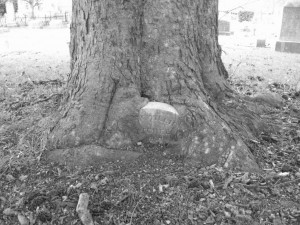 I’ve thought about that headstone many times since. It’s almost a parable about our relationship to the world in which we live. Or at least, a reference to Ecclesiastes Chapter 1:

What do people gain from all their labors
at which they toil under the sun?
Generations come and generations go,
but the earth remains forever.
.
.
.
What has been will be again,
what has been done will be done again;
there is nothing new under the sun.

One thought on “Time”