St. Simon’s Island is one of those lesser-known gems of the southeast United States. It sits about an hour north of Jacksonville, beside Brunswick, Georgia. It’s a beautiful little island community that has somehow escaped the overbuilding and commercialism that has afflicted places like Gulf Shores, Alabama. It has a nice white beach, although much of it gets submerged during high tide, and hundreds of live oaks that cover the island. And on some of these live oaks, you can find faces carved into knots on the trunk. Local sculptor Keith Jennings is the responsible party, carving his first spirit in 1982 when, as he says, he had “too much time and too little money”. This was his first spirit: 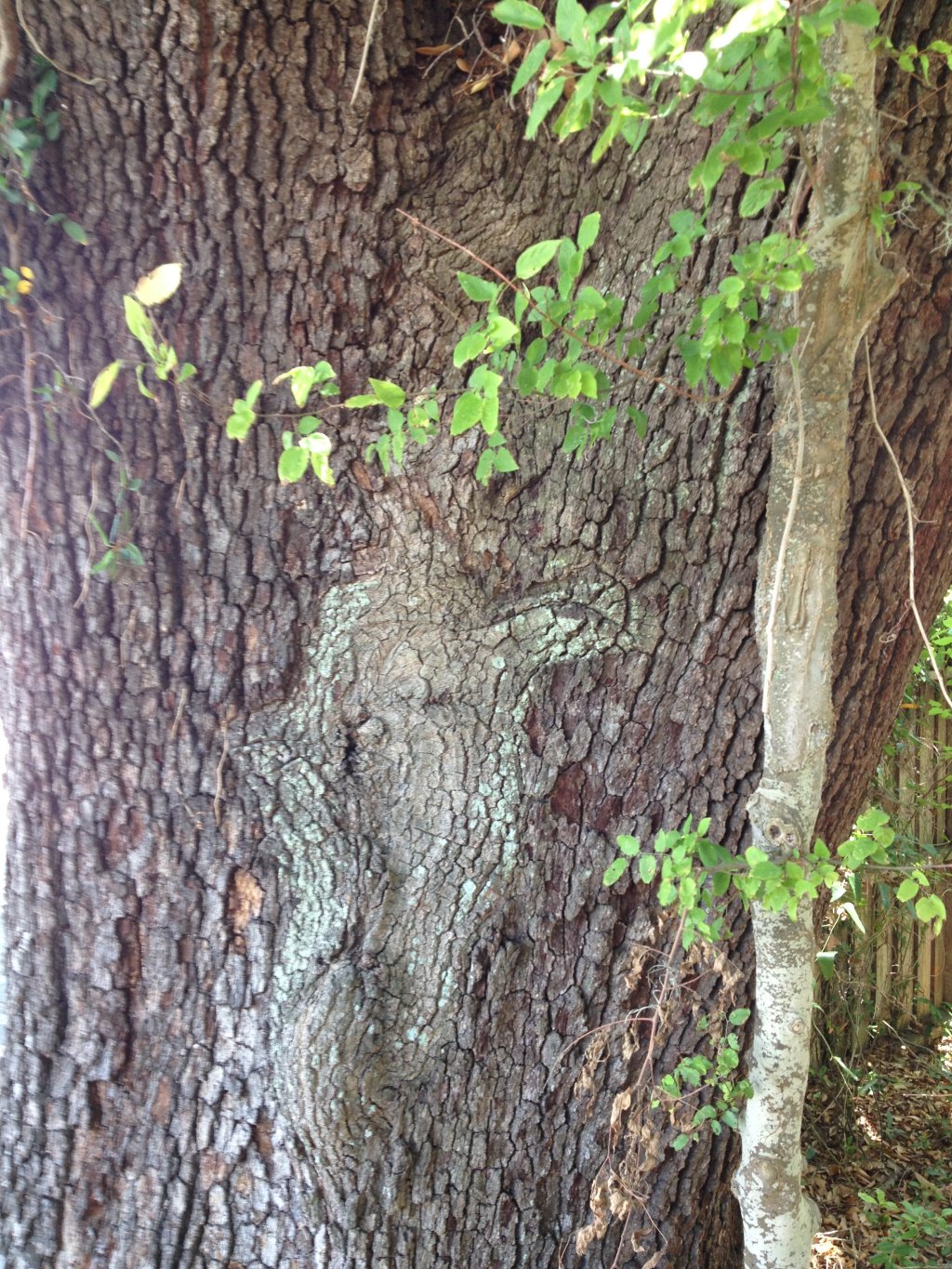 It doesn’t look like anything now, because the tree has, as Jennings puts it, “reclaimed” the spirit. This and his second spirit were in the yard of the house where he lived then. Here’s the second spirit, now being reclaimed by the tree: 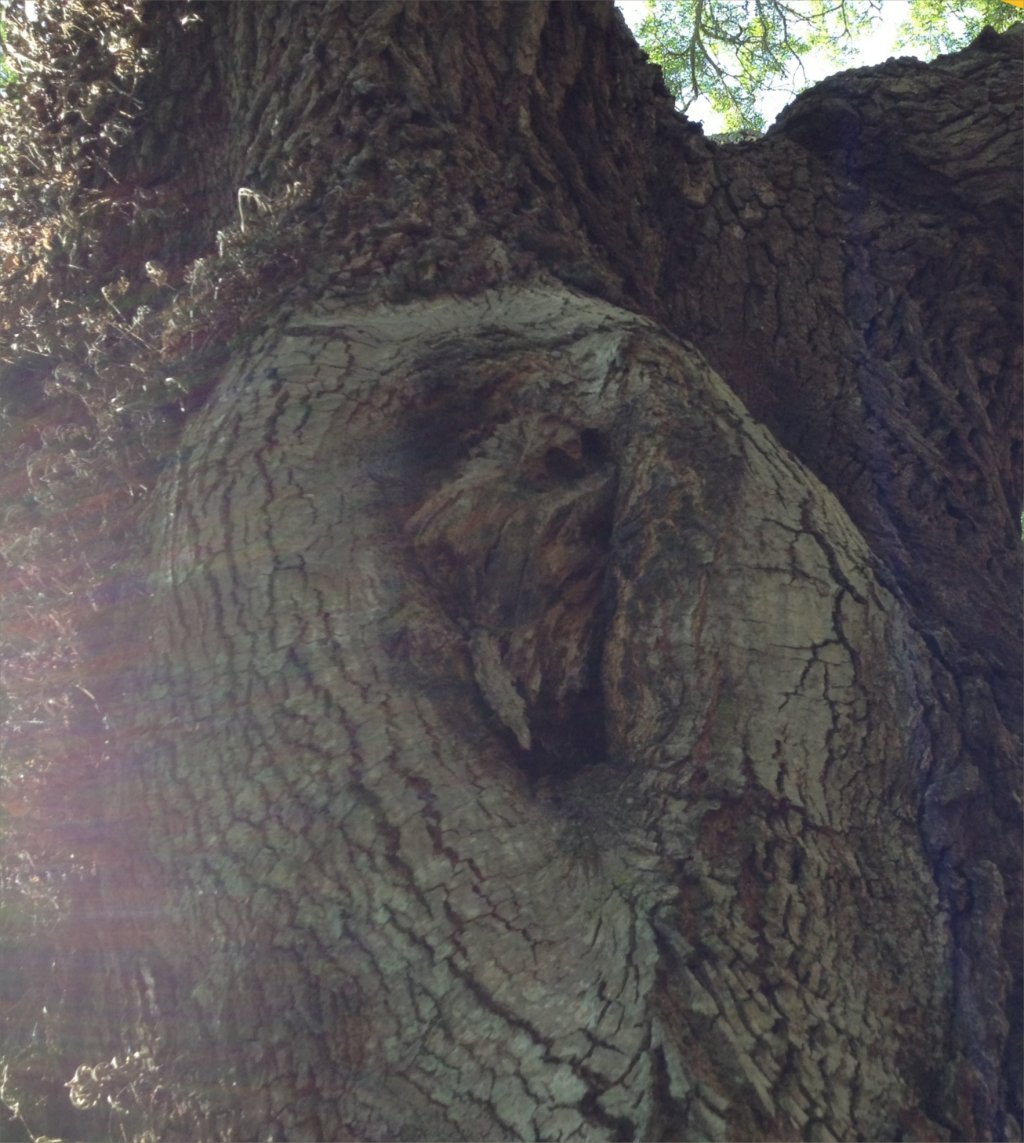 Legend has it that his third spirit, which is on a tree outside a local tavern, was carved in order to pay his bar tab (beginning with this one, you can see a higher resolution image by clicking on the picture): 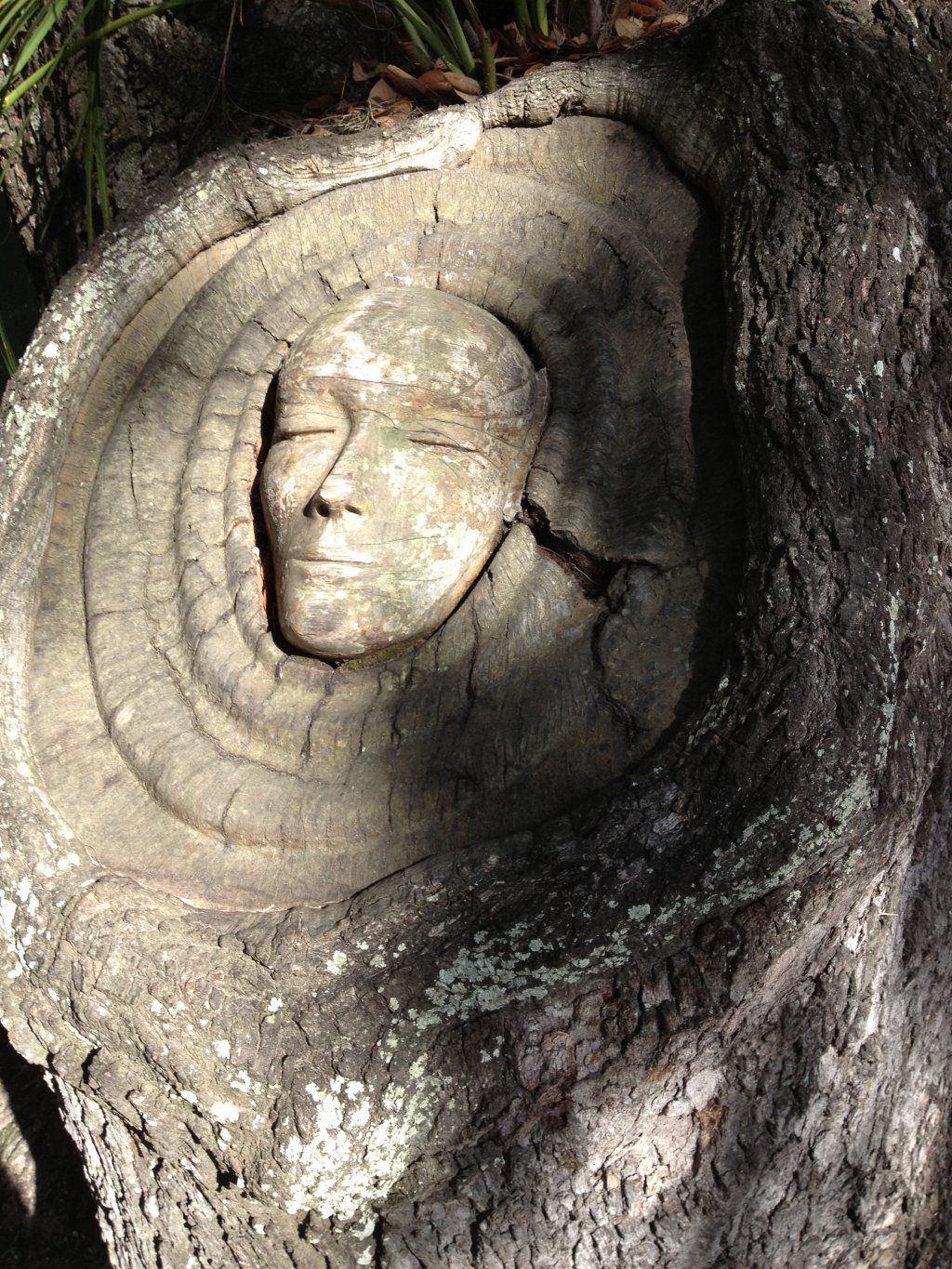 I don’t know if that’s true, but it is probably the most visible and easily found spirit. From there, I don’t know the order, so I’ll just line the photos up in the order in which I found the spirits. This one, outside a restaurant in a shopping center in the center of the island, is being reclaimed by the tree: 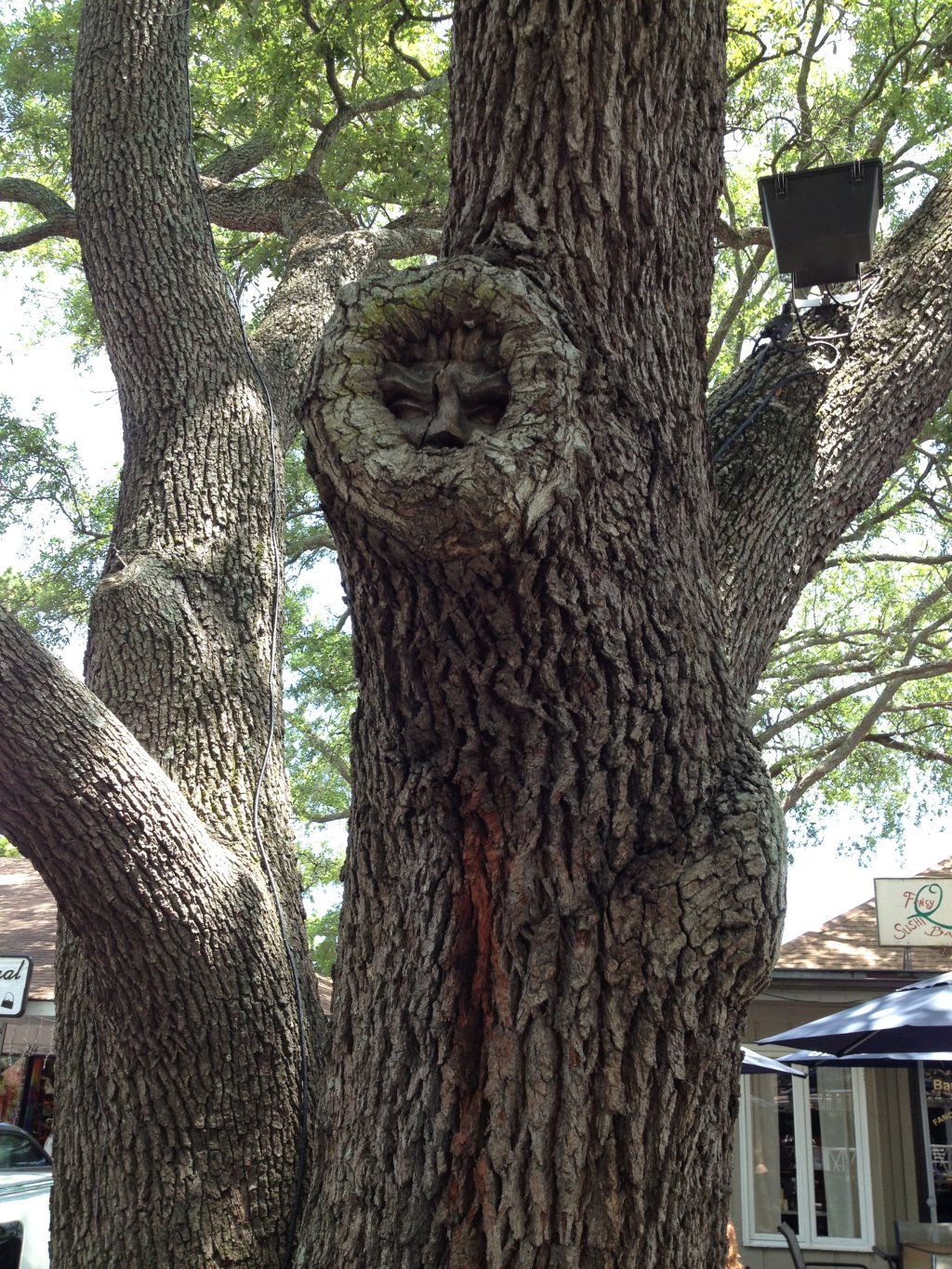 The next one, in the parking lot of a retirement home, looks recent, but apparently it looks that way because Jennings was asked to come back and clean it up: 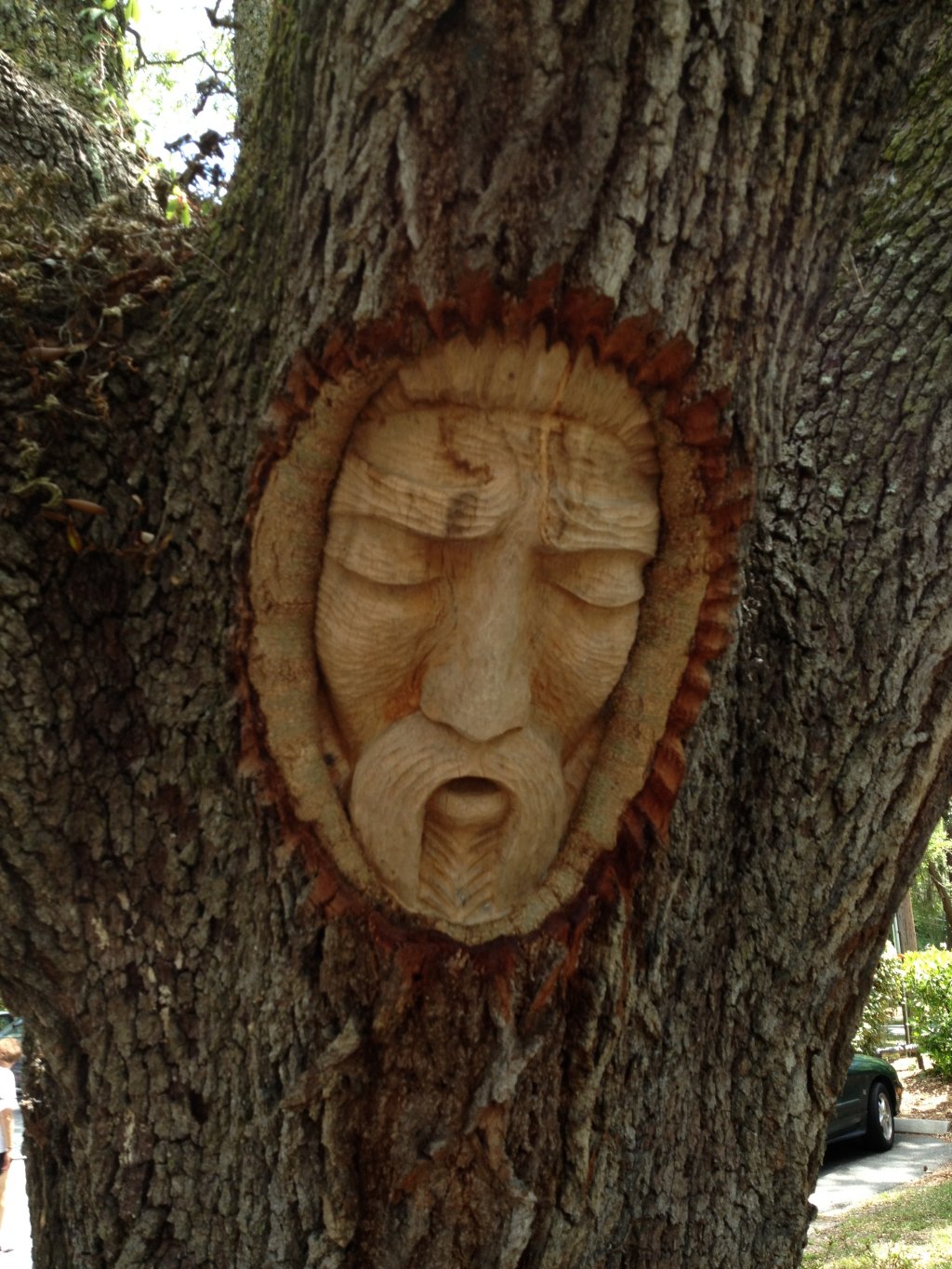 The local story has it that Jennings carved these to represent sailors lost at sea. The sculptor says, however, that isn’t the case. In an article from 2009 in the San Diego reader, he told the writer that “The trees do it all. I don’t have that much to do with it. The wood speaks to you, ya know?” If that’s true, then the wood speaks to him in ways it would speak to few other people.

This spirit, also in a small shopping center, has unfortunately fallen victim to ants. It’s slowly being eaten away: 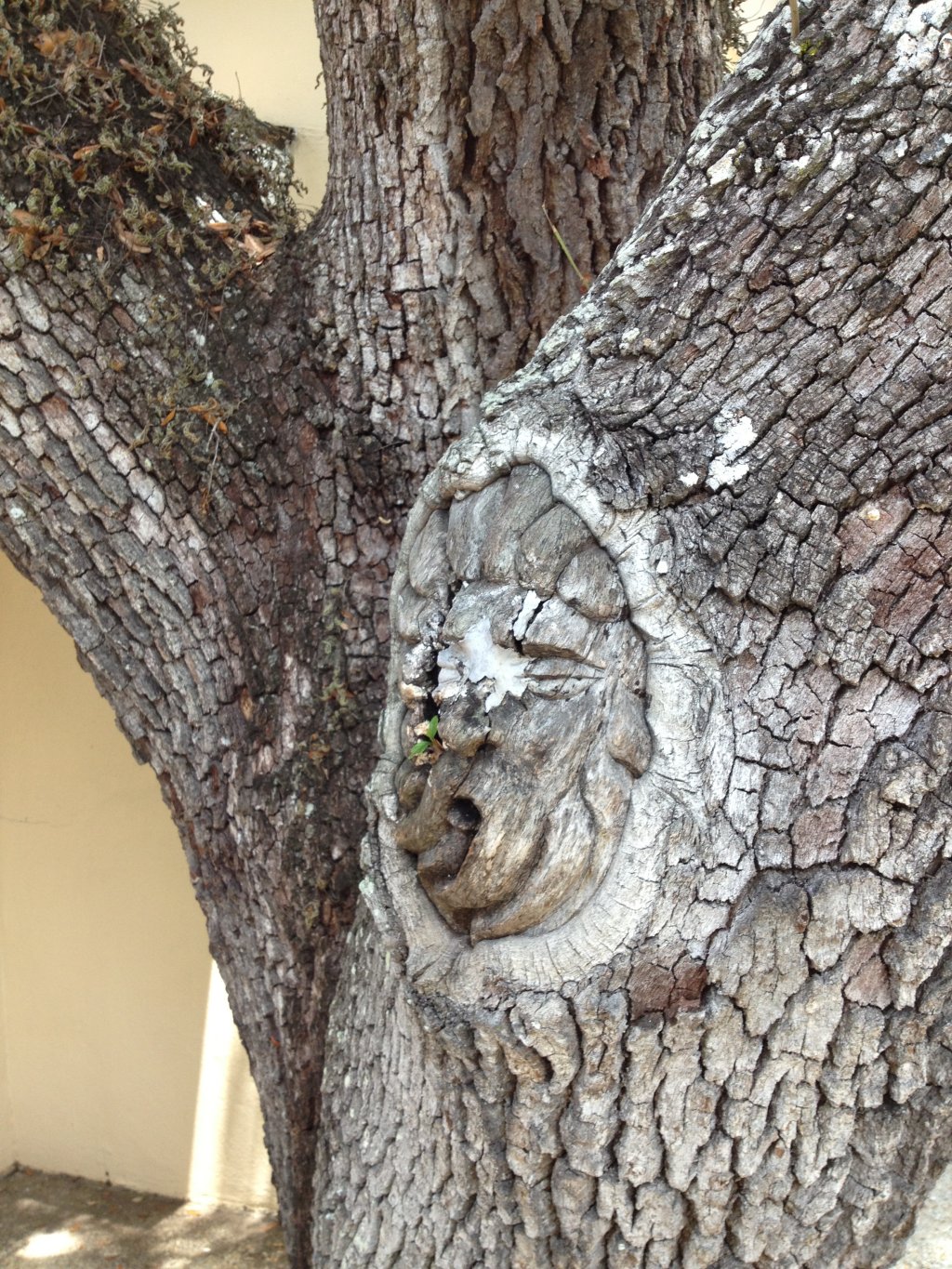 At some point, people began commissioning Jennings to create spirits on their property. I don’t know if it’s kosher to go on the property to see them, but I was on a mission, and I took the chance that I wouldn’t be greeted by shotguns or dogs. It was too good to pass up: 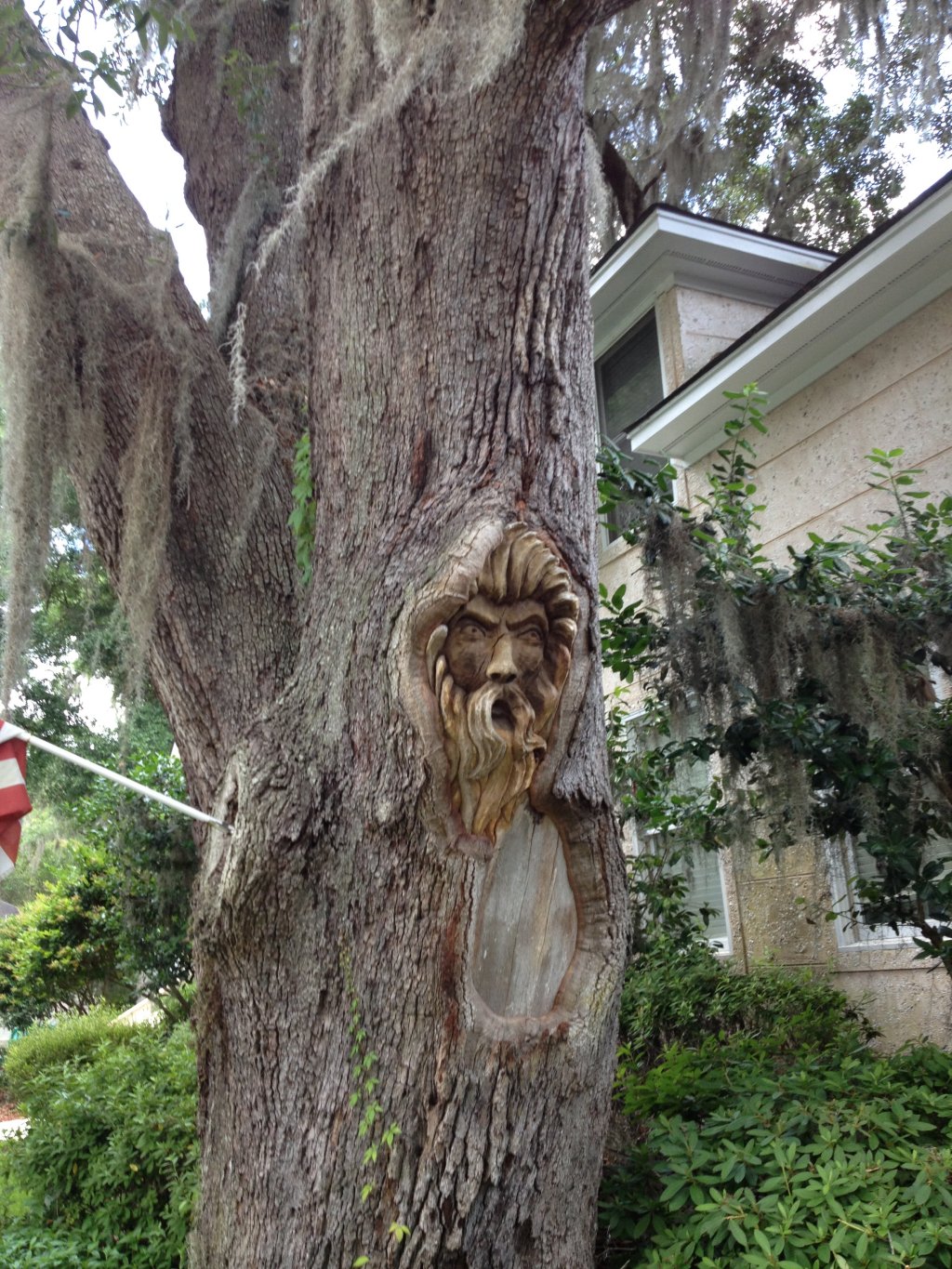 The remaining spirits (except for the last, which is a special case), are all on trees in an area where houses are just now being built. Someday soon, they’ll all be on private property. I have no idea in what order they were carved. I hope the future owners are willing to share. 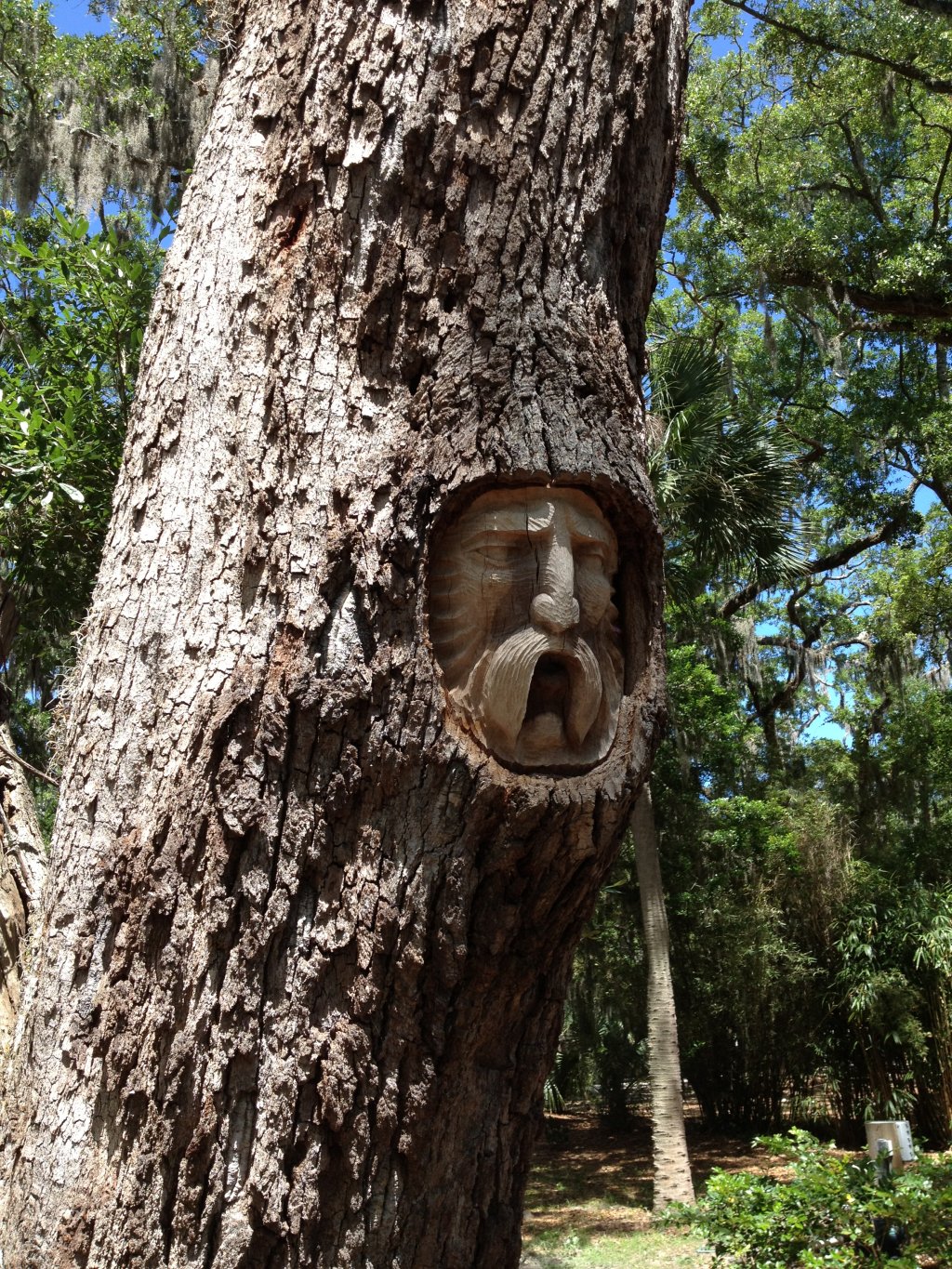 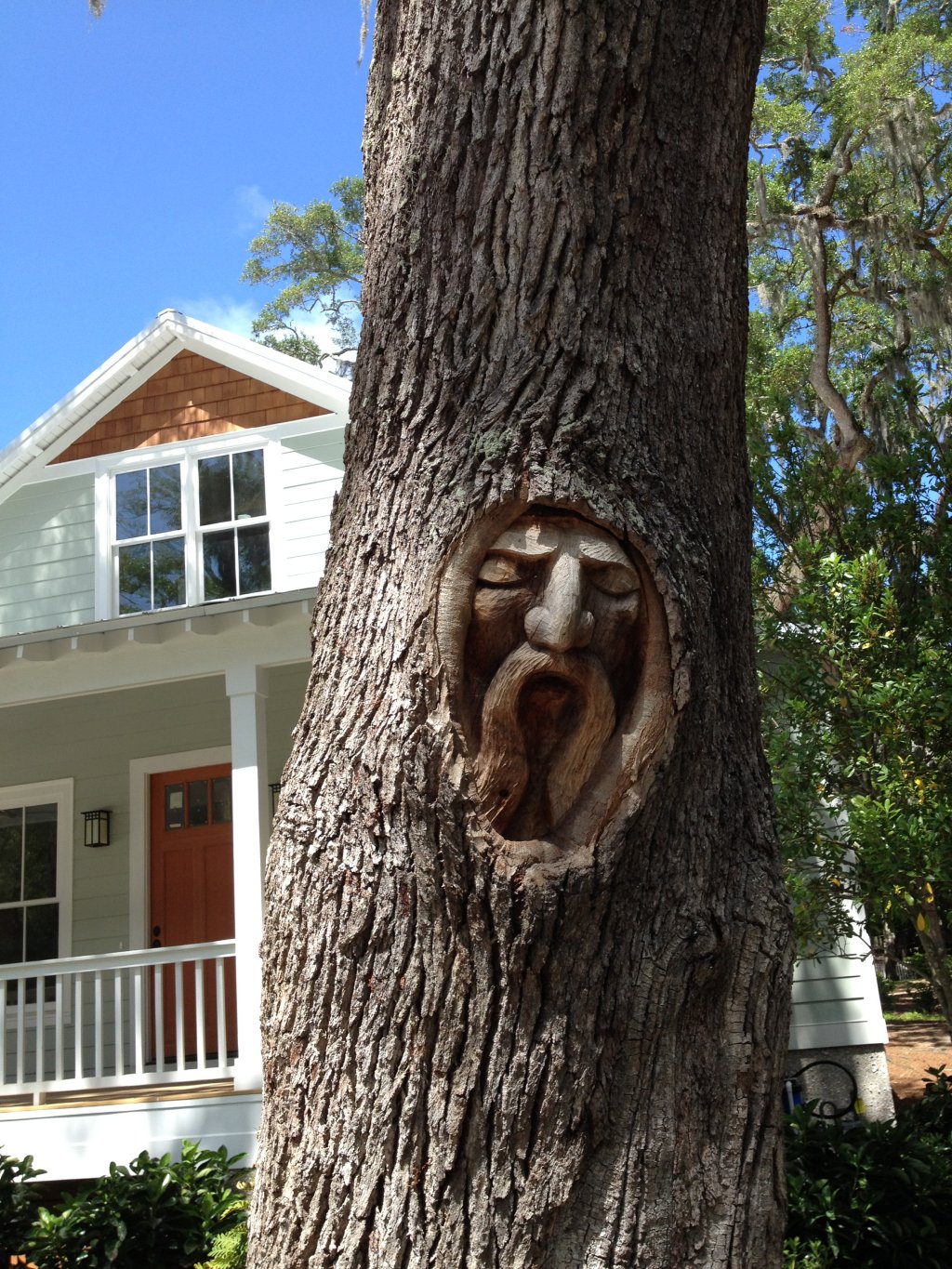 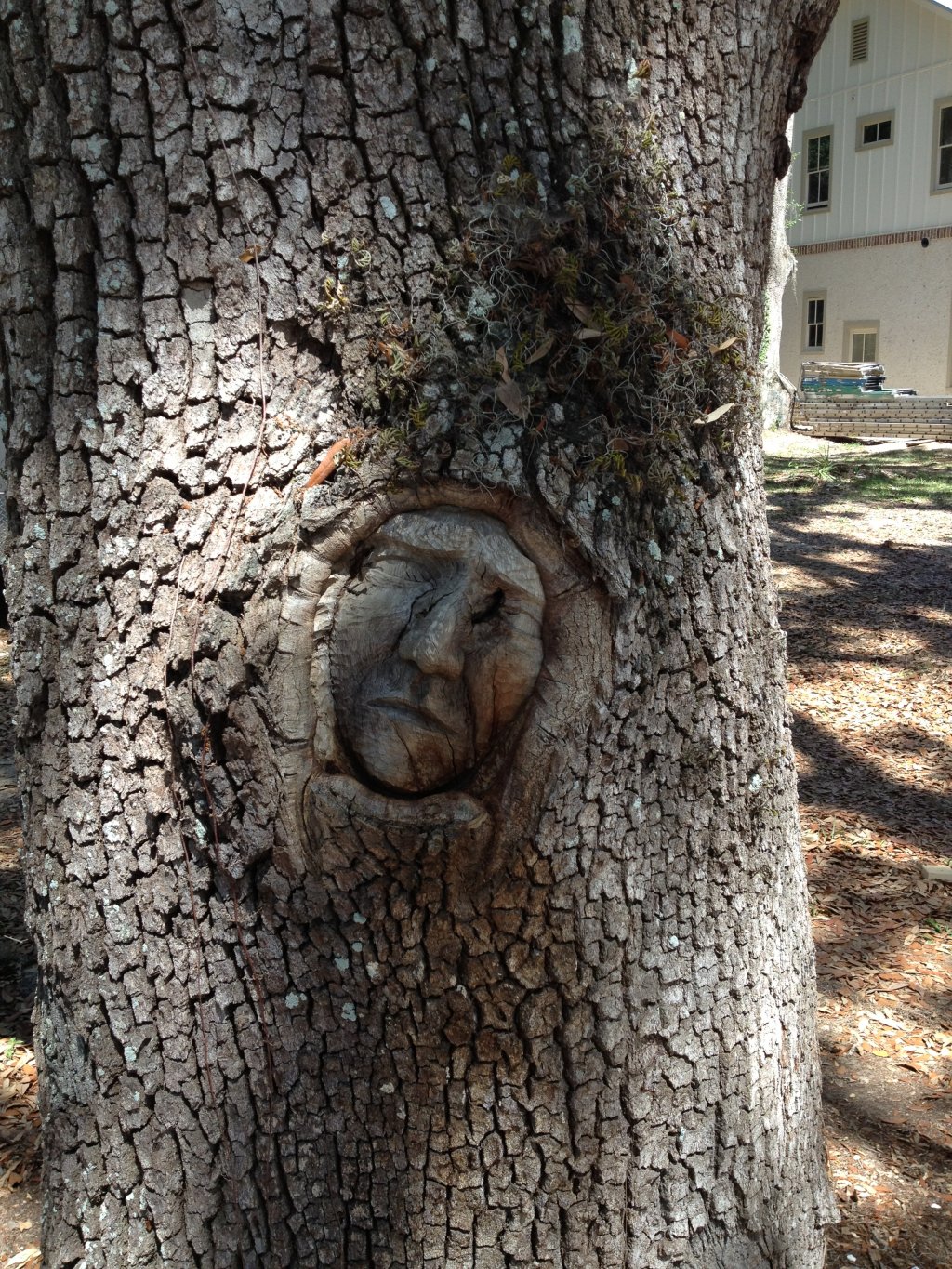 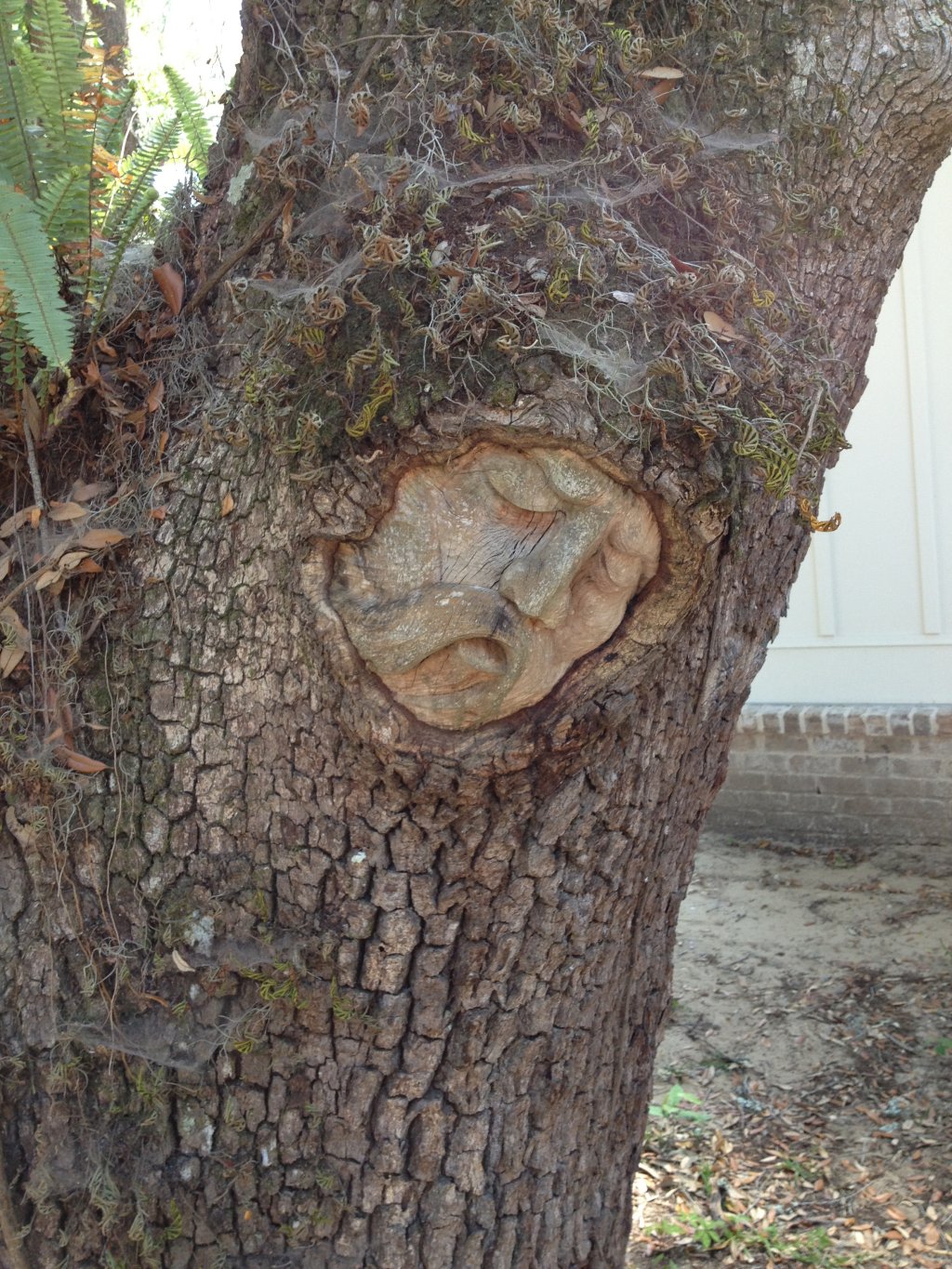 This next one has a distinct Mayan look, which was apparently intentional: 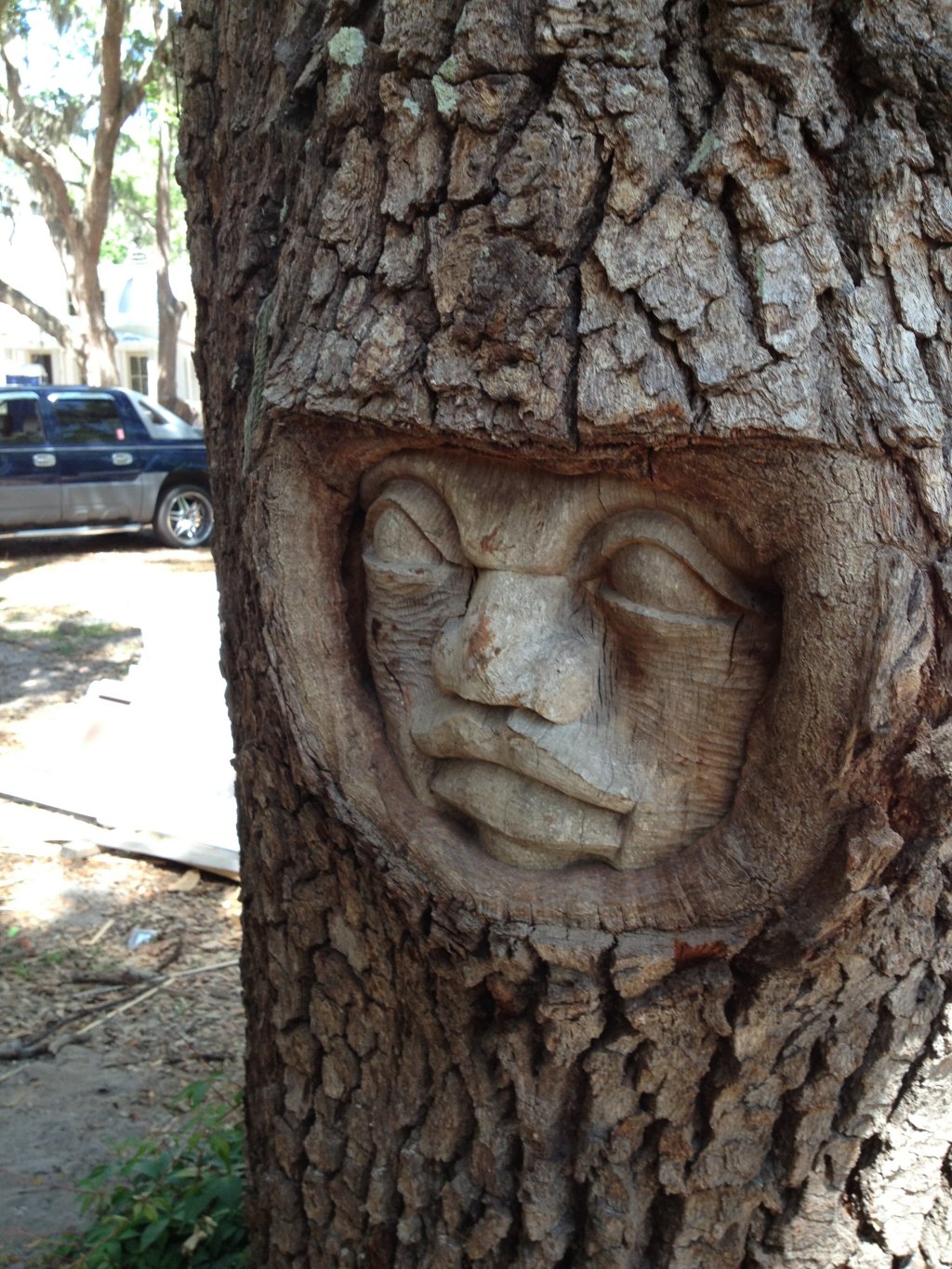 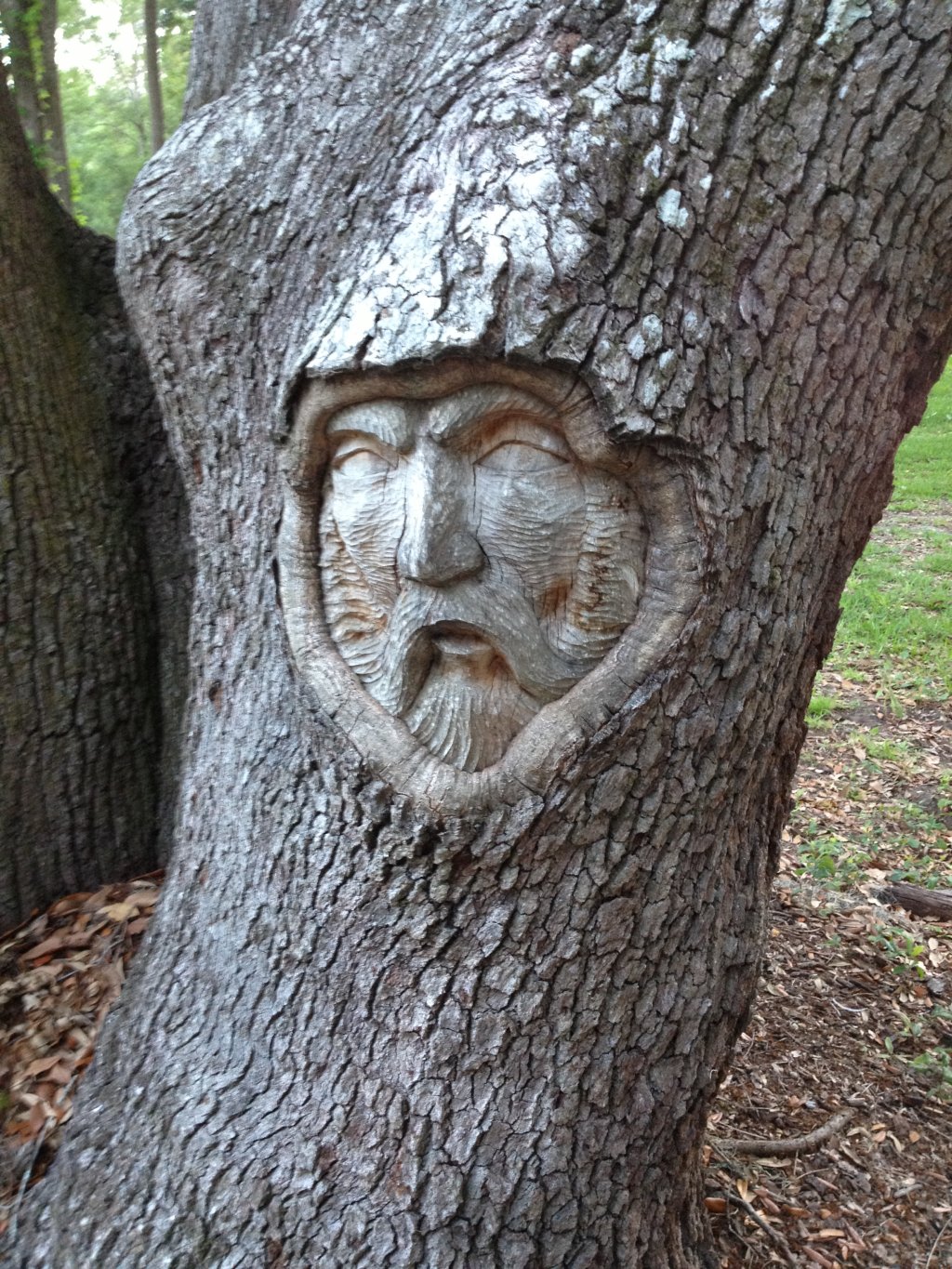 And this one has an Asian appearance, which was also apparently on purpose: 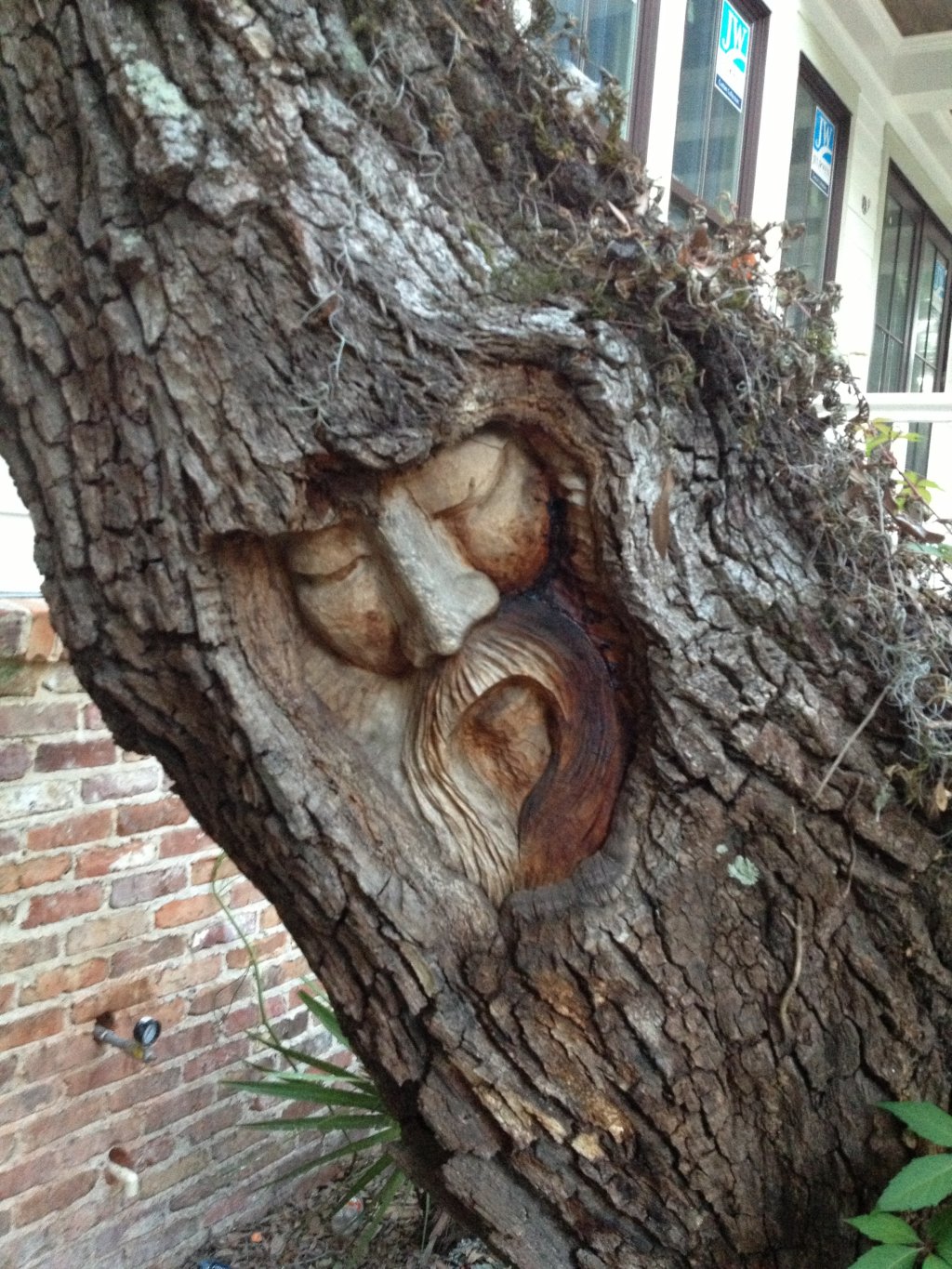 On this one, I was told the blue ball indicated he was a wizard. I have no idea if that’s true. 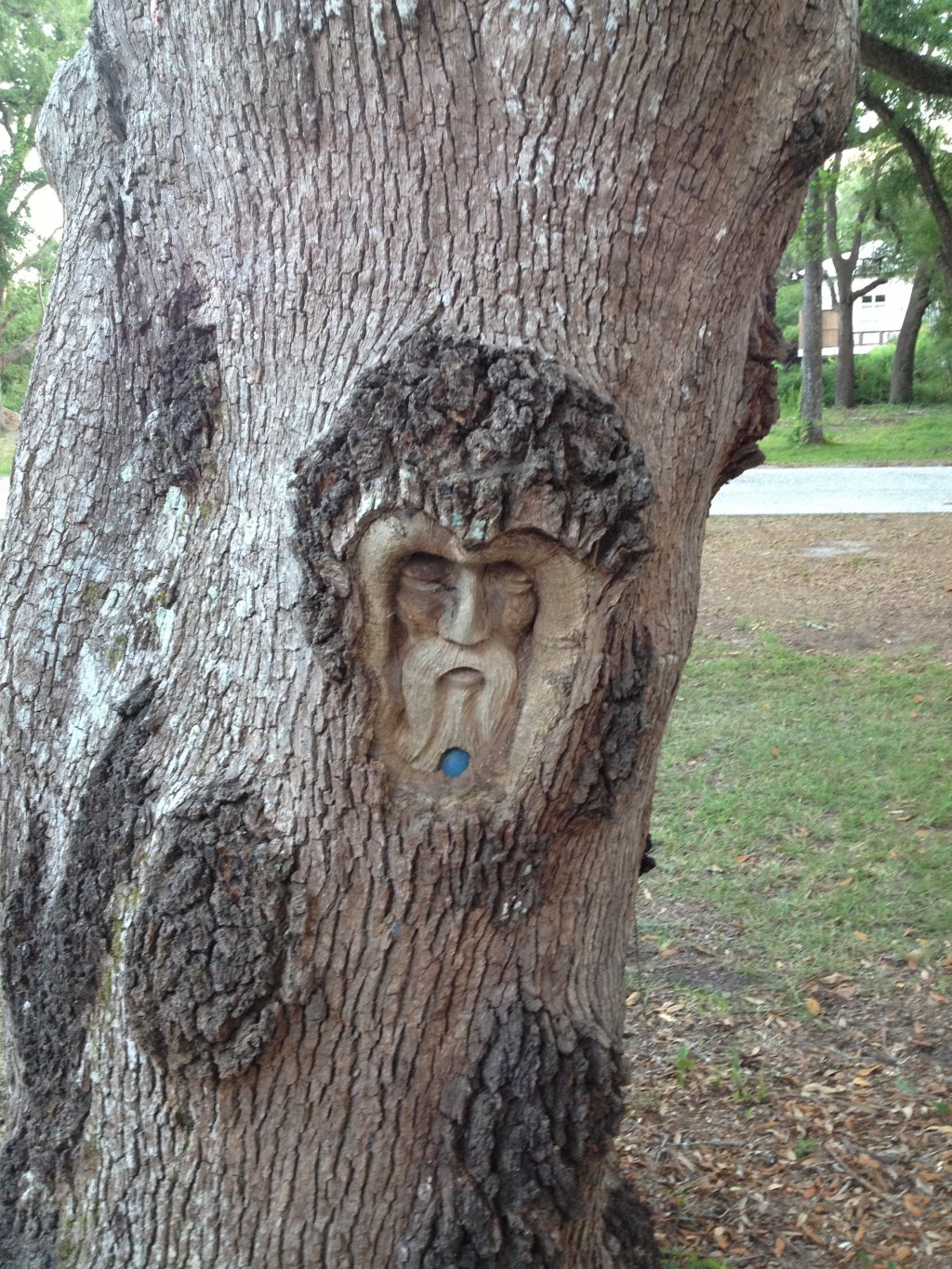 As I said, the last is a special case. First, it isn’t on St. Simon’s Island. It’s located on a tree in a neighborhood on the mainland. And it isn’t a face, it’s a full figure, and not of a man, but of a woman. It’s called “The Lady Of Belle Point”. It was early morning when I found this one, on my way out of town returning home, so the light wasn’t good and it’s a little hard to see (one day I hope to go back and get a better photo of this one). If you click on the picture, you’ll see the carving outlined: 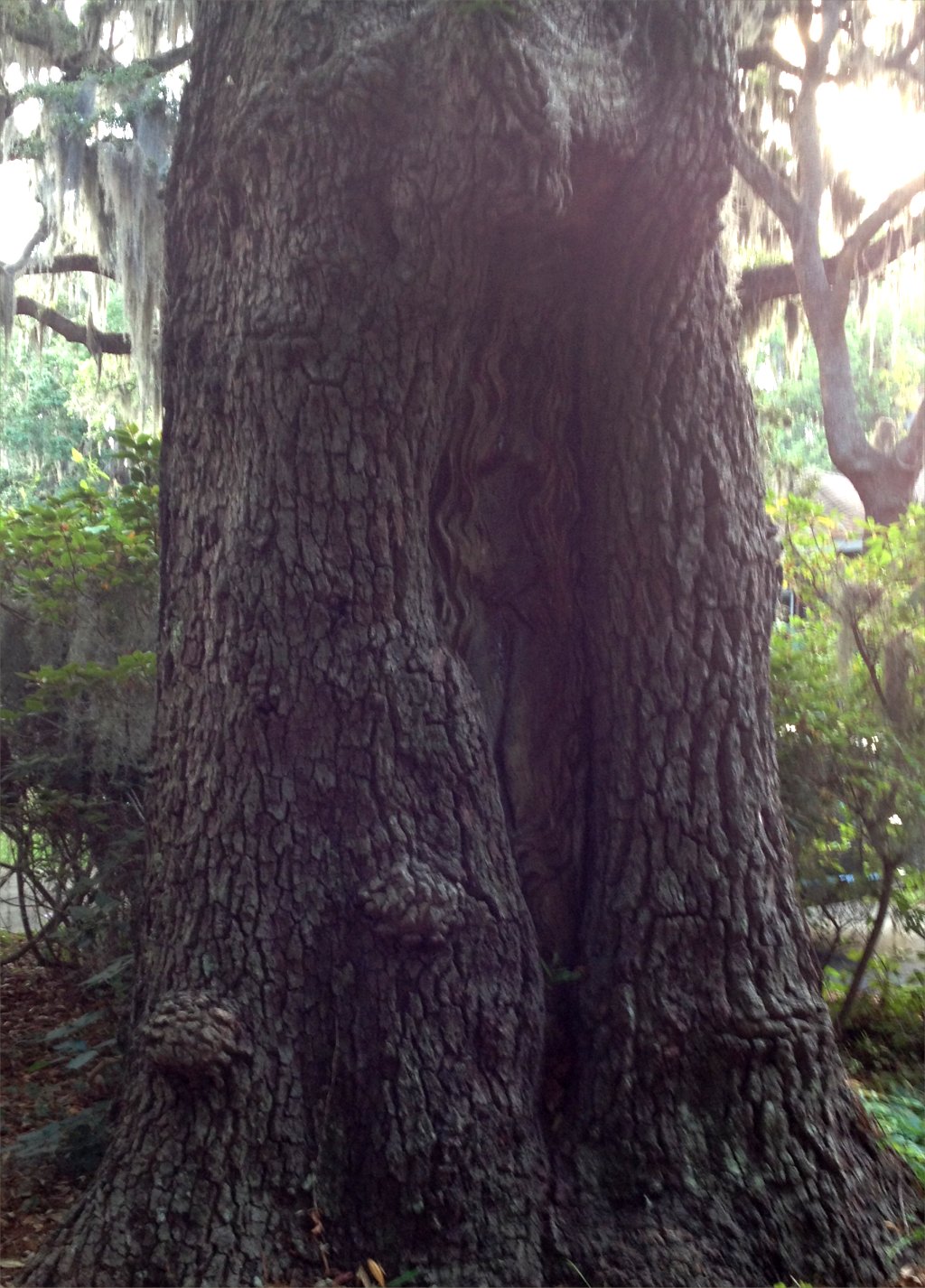 People see different things in these carvings. Some see sadness, some see serenity, some see both. Regardless, they’re a beautiful bit of inspiration by a very talented artist.

This entry was posted in Other Stuff, Photography, Southern Stuff and tagged spirits of St. Simon's Island. Bookmark the permalink.