Well, yes. I’m not sure what’s got me going on the underground stuff this week. But now that it’s started, I’m blogging my way through it. So, for the third installment…..

I’ve heard claims about tunnels under the DMZ almost as long as I’ve heard about the Korean War, which is most of my life (my dad was called back to active duty in the summer of 1950, although he never actually got sent to Korea). The suspicion was that Kim Il Sung, and later Kim Jong Il, had ordered the construction of tunnels to provide a path for massive infiltration behind the front lines in the event of a second Korean conflict. Sometimes these were rumored to be relatively small, just big enough to allow units of soldiers to pass in single file; sometimes wide enough to allow tanks to go through. Sometimes there were only a couple of tunnels, sometimes there were dozens or even hundreds. The one consistent thing was that everything I ever read agreed that tunnels were definitely there.

So there’s always been a bit of fascination for me in the idea of these tunnels. Not just from the military aspect, but just the thought that North Korea would go to quite a bit of effort to do this. So I was very much interested to run across this piece by a retired operations officer in the Eighth Army in Korea, about what was perhaps the first verified tunnel discovery. Then I found this website, which detailed four tunnels and added photos (I can;t figure out whether the first piece refers to the first tunnel here). And what do these tunnels look like? Well, this:

And this – I assume the cart and artillery shell were the spoils of discovery: 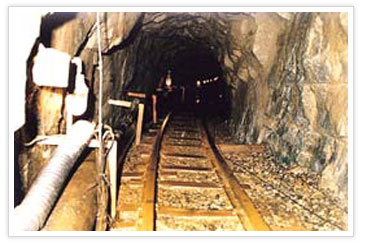 It’s a pretty serious game. As noted in the first piece I linked to, an American officer was killed by an explosion when he was investigating the tunnel. There was an explosion during exploration of another tunnel later:

As far as where the four verified tunnels are, here’s a rough map:

Did the North Koreans ever intend to actually use these? Would they have made a difference if they had? Or were they just another tactic in the Kims’ campaign of just doing stuff to poke the South Koreans and Americans? Who knows? So it’s just another mysterious underground thing.