My dad once told me I was alive because of the atomic bomb. He was slated to be in the first wave of the invasion of Japan, as commander of an artillery battery; his unit would have been put ashore on landing craft that would be beached, with one 8″ howitzer per craft, with orders to fire until killed. There was no other way, the planners thought, to get close artillery support on the beach during the initial wave. So, when the atomic bomb caused Japan to surrender and the invasion was cancelled, he came home, alive and well and ready to start a family.

Nine years later I was born (after three older sisters). I grew up in the height of the Cold War, with the threat of nuclear bombs and missiles just over the horizon. Somewhere around the age of 7 or 8, I became aware that one of our neighbors had something called a “fallout shelter”. I didn’t really know what it was – these weren’t people I knew, they had no kids my age, so I never went to their house, and I never saw the shelter. This being the early 1960s, however, most of the houses in my neighborhood had carports instead of garages, and we could see through the carport into the backyard. And there, behind their patio, we could see the brick structure that was the entrance, with a ladder descending into the ground. I have no idea what it was like inside. We thought these people were “rich”, because their house was bigger than most on the street, but I now know that it was just another solidly middle-class home. No houses in our area had basements – basements were, and still are, essentially unknown in Mississippi. So this was separate from the house, and probably not large at all – something like this:

I only knew of one other home with a shelter, and it was a very small space, about the size of a large septic tank. Thinking back, it may have been a tornado shelter, but it was installed in the early 60s. I’m sure there were others in Jackson, which then was a thriving city of about 200,000, and since we didn’t live in the upper-class part of town, there were probably some fairly nice ones that I would never have known anything about. Later, the familiar yellow signs started going up on certain buildings, and I realized that there were larger public shelters, where in the event of an attack people nearby would go, like this:

They would doubtless be all happy like these people are, until they started thinking about what was actually happening. Because even then, the shelters didn’t make sense to me. There was no way you could shelter anything more than a tiny percentage of the people. And they would live a life that none would have been prepared for, in communal spaces: 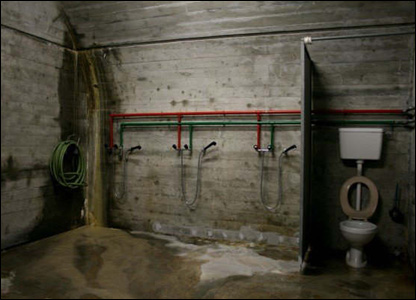 And how long could they stay underground? The home shelters I would see described in magazines generally lacked such things as kitchens, and bathrooms, and showers – and any sort of privacy. It would have been survival at a very basic level, followed by emergence into a world that wouldn’t resemble in any way the one that was there when they descended into the ground. But the fear was real, even if the reaction was at least somewhat irrational. And so some of those who could chose to prepare to burrow into the ground, and pretend they could save themselves and their families. If the balloon ever went up, however, the concept of “neighbors” would have disappeared. There was no room at the inn for anyone but immediate family. Fortunately, we, the Good Americans, and the Evil Godless Soviets, managed to traverse those years without blowing each other up, so the shelters went unused and eventually forgotten for the most part. Most have, by now, probably been filled in, because in many areas the unrelenting force of groundwater gradually filled the shelters. I’ve never been in one of the home shelters. I’d like to, just to satisfy the curiousity of a ten-year-old boy always wondered what it was like inside one. I don’t think I’d need to spend much time inside.